Vampire Hunter ~The Lord of Night and the Huntsman~ 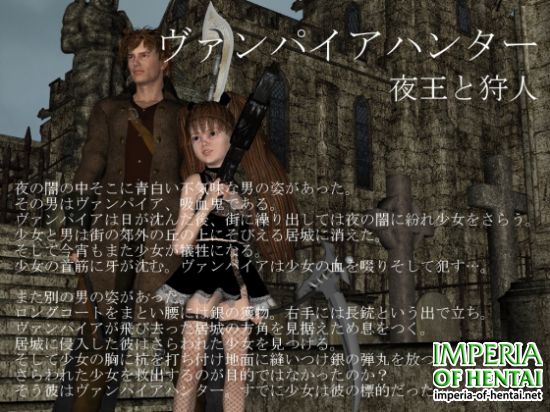 A pale, ghastly figure of a man stands in the dark night.
He is the kyuuketsuki, the vampire.
After a day in submersion, he prowls the moonlit town to sweep up a young girl.
The vampire and girl disappear into a castle beyond the reach of the village.
She will become his sacrifice.
His fangs penetrate the nape of her neck. He drinks of her youth, then ravishes...

There is another figure of a man.
The long trenchcoat on his back is a trophy of the hunt. In his right hand, a rifle.
He follows the trail of the bloodsucker that fled recently from this place.
Sneaking into the castle, he discovers the taken girl.
The man buries a spike between her breasts and executes her with a bullet.
Was it not his mission to rescue her?
No. As a vampire hunter, she was his target, but not for saving.

* How to play
The story unfolds from two perspectives: the hunter and the vampire.
You can choose either one at the start of the game.
Both perspectives follow the storyline of the hunter trying to kill the vampire.
However, the two perspectives are distinctly different.
The hunter kills vampires to fill his coinpurse and improve his rank with the guild.
The vampire snatches girls and entrances them, rearing them to adulthood.