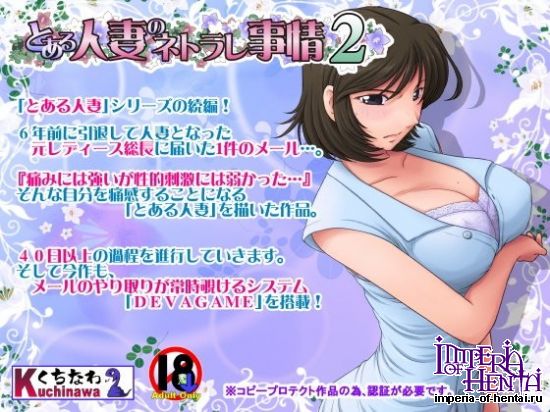 A sequel to "toaru Married Woman" Series!
One email reaches it to the former Lady's president who I retire six years ago, and became the Married Woman….
"Were strong in a pain, but were poor at sexual stimulation"…』
Will keenly realize oneself such; a story of "a certain Married Woman"….
Be made ,○ shame while beginning with Intimidation, and a body gradually streams….

Schedules more than 40 days progress.
And the product is equipped with "DEVAGAME system" now, too.
Software to steal an email, and to read from the scene with the early stages becomes able to start.
Can refer to the process that is not talked about in main part and the image which I photographed.
Basic CG25 mai. 15 pieces of cuts including it for a difference, photograph image 53 pieces

There is not very the Genre width of the H Play, and there is not the Play which is Koa.
Be driven by Situation.
The end is two kinds now, but have additional possibilities.
※In the case of So, Price is Please be forewarned. in what break out

Because directionality and a purpose are different from the previous work,
The interested person, please refer to a formal "Introduction" page.